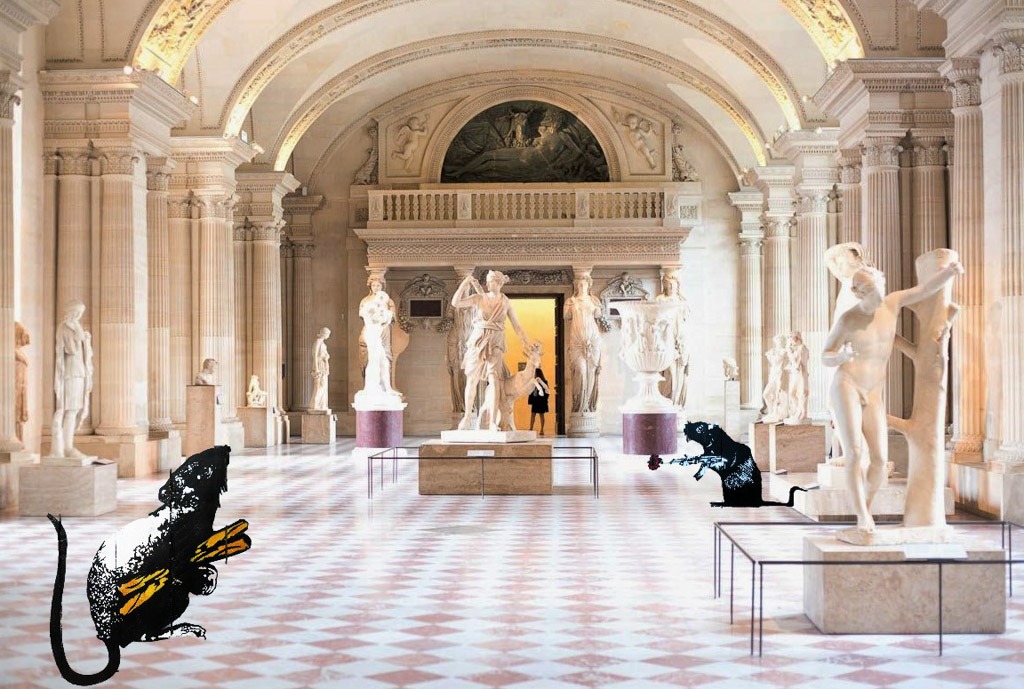 Can you imagine Blek Le Rat‘s (Parigi, 1951) rats wandering around Louvre’s rooms with their rifles and baguettes under their arms? They would certainly be kicked out quickly. We all know that is forbidden to bring food and weapons into museums, even if they shoot flowers.

While it is quite unlikely to meet rats in museums, it is much less likely to meet their creator Xavier Prou ​​- aka Blek Le Rat – who is a regular visitor. Just look at his works and you will have proof. In his walls and in his gallery pieces we find the protagonists of Western art history: Michelangelo’s David, Leonardo’s Mona Lisa, Caravaggio’s Angel of “The rest during the flight into Egypt”, Guido Reni’s San Michele Arcangelo…

Blek’s imagination is permeated with the works of the great masters and a special place is occupied by modern Italian painters. If we know something of its story it is not difficult to understand why. From an early age his parents, passionate about art, took the young Xavier on vacation in Italy, for long walks in the cities and in the corridors of museums. Once an adult, Blek returned to Italy several times and in 1987 even stayed for some time at the Institut Français in Naples, leaving traces of his passage on the walls of the city.

Art has always been at home in the Prou ​​family: “In my house there were paintings everywhere, because everyone in my family (my two uncles, my aunt, my paternal grandfather) used to paint, there was the smell of turpentine everywhere. “

Blek Le Rat has repeatedly stated that we are the fruit of our time, of the experiences we have lived and of what we have seen. His travels and his admiration for the art of the past can therefore help us to get to know this artist better.

The history of art, however, can also represent a brake for a young artist, who may feel crushed by the geniuses of painting, but Blek managed to find his own voice.

He brought the characters of classical painting and sculpture into his and our world, redefining them according to his own style and updating them. The David became a soldier holding a Kalashnikov and the Mona Lisa a writer holding a spray can.

The characters that Blek Le Rat chooses are also part of our imagination. His art is an “Art to the people“, which comes to meet the viewer and does not want to be cryptic. Even a revolutionary movement such as Street Art confronts and looks with interest at the history of art and museums which, in addition to being places of inspiration, can allow Urban Art, ephemeral in itself, to survive time.