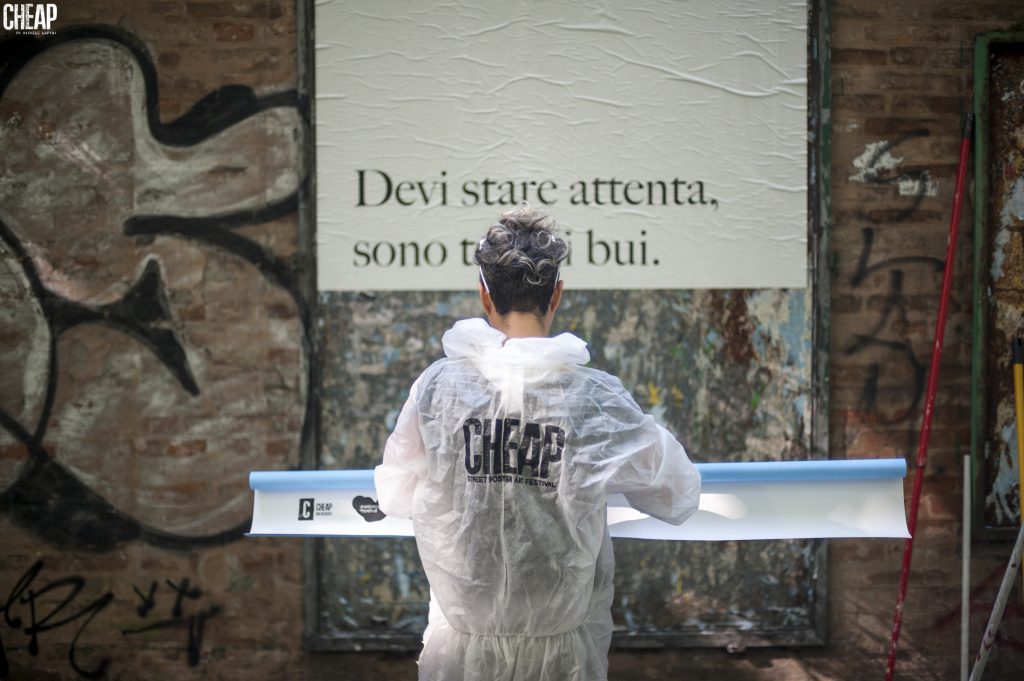 Welcome back with another article dedicated to Street Art!

Today we want to talk about one of the most interesting Urban Art Festival, the Cheap Festival.

CHEAP- Street Poster Art Festival was born in Bologna in 2013 thanks to Cheap, an independent project that deals with the promotion of urban art in the territory.

One of the things we like most is the fact that it was founded by a team of all women! 🙂

What are the main interventions that Cheap deals with?

First of all, the intention is a progressive urban regeneration, allowing the city and its surroundings to develop cultural projects, combining activism, valorization and curatorship.

The Street Art Cheap Festival is held every year in May and attracts famous artists from all over the world. An international Call for Artists is usually launched and ad hoc guests are chosen to create site-specific interventions. Once selected, the works are for all intents and purposes “distributed” throughout the city and posted on billboards: Bologna becomes a great open-air museum!

Obviously several of our artists have participated in this festival, we want to remember the main interventions:

Jacopo Ceccarelli, aka 2501, is unquestionably one of the most interesting street artists of his generation. For the Cheap Festival 2015 edition, 2501 has created an intervention entitled Negative Spaces 02 creating works on no less than 43 notice boards in the Emilian city and on the wall of the Viale Masini station.

The positive-negative binomial is a fundamental part of Jacopo’s research, who on several occasions has created works about it, like the one you can admire below!

Articulating his work on 43 bulletin boards in 2013, with “Every drop is a waterfall” MP5, Roman queen of contemporary Street Art, brings back his radical aesthetics made of black and white, of shapes that recall the unconscious but take on a political and social intent. If you are interested in the catalog of MP5 Changes, please contact us 🙂

Always for the Cheap Festival 2013 edition, BR1 Italian street artist has created a wall in Via Stalingrado, as usual provoking and inducing in the public deep reflections on current issues. In particular with this intervention but more generally with his art, BR1 wants to bring out the complexity of a theme such as immigration and its consequences on a traditionalist society.

Among the greatest interpreters of stencil art and the technique of dusting, the collective Orticanoodles for years elaborates a very personal pop iconography, devoting himself mainly to the study of the portrait. For the 2014 edition of Cheap Festival Orticanoodles realized Ritratto Poliedrico of Roberto Roversi, poet and partisan, at the Pilastro.

Could they be missing? Invited as Guest Artists, Sten Lex have participated in the 2013 edition of this festival, creating an amazing work through the Stencil Poster technique (Sten Lex have personally invented this technique!) on the side of the Luigi Spina Library at Pilastro in the San Donato district.

The Call of Cheap Festival 2021 is titled “POST“, an invitation to artists to try to explore and imagine the future!

Keep following us for the next insights 🙂