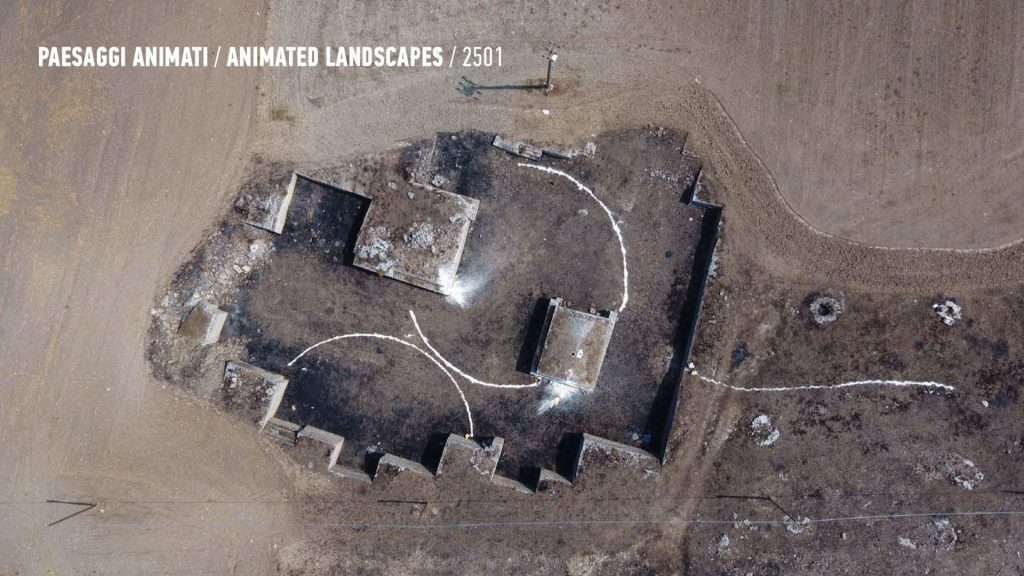 The first edition of the PERFOMATIVE.01 festival, held in the new MAXXI premises in L’Aquila, is entitled CONTACT(LESS) and is organised in collaboration with the Accademia di Belle Arti dell’Aquila.

After almost two years of restrictions due to the pandemic, the festival places the performing arts at its centre as a sort of antidote to re-accustom the individual to contact and exchange with the other. An event that spreads throughout the city and bears witness to L’Aquila’s artistic vitality.

Many artists took part in the first edition of #PERFORMATIVE, including our own Jacopo Ceccarelli: Never2501, a multimedia artist who involved the public in his performance.

On this occasion, our artist Never2501 created Animated Landscape, a participatory land art work in which he involved the public in an interactive performance. The artist led the participants in environmental actions that emphasised the physical and geometrical characteristics of human architecture and those of the land.

The performance was filmed with a perfectly perpendicular drone, which captured the ephemeral compositions, created by the participants, in dialogue with the architecture.

In a second moment, between the walls of MAXXI L’Aquila, the artist performed together with his sister, the singer iosonoAria, in an improvised duet on the filmed images. With the aid of his Macchina, 2501 sonorised the images of the interactive performance he directed, experimenting with new ways of interacting, creating a pretext for social interaction.

Animated Landscape is part of the Nomadic Experiments project, an idea of the artist Never2501 born in 2013 and still in progress. It is a space-time reflection in which the artist experiments with different forms, materials and ideas to create site-specific interventions.

In an attempt to take us away from this reality, the artist Never2501 makes us travel all over the world, from Los Angeles to Vienna, from Mongolia to Canada. Animated Landscape joins the stages of this nomadic journey, along with La Macchina 05, Negative Spaces 04 and On the Brink of Disaster.

Keep following us for more insights into our artists! Our Street Art blog awaits you for the next update! Until next time! 🙂