The Milanese production of Orticanoodles 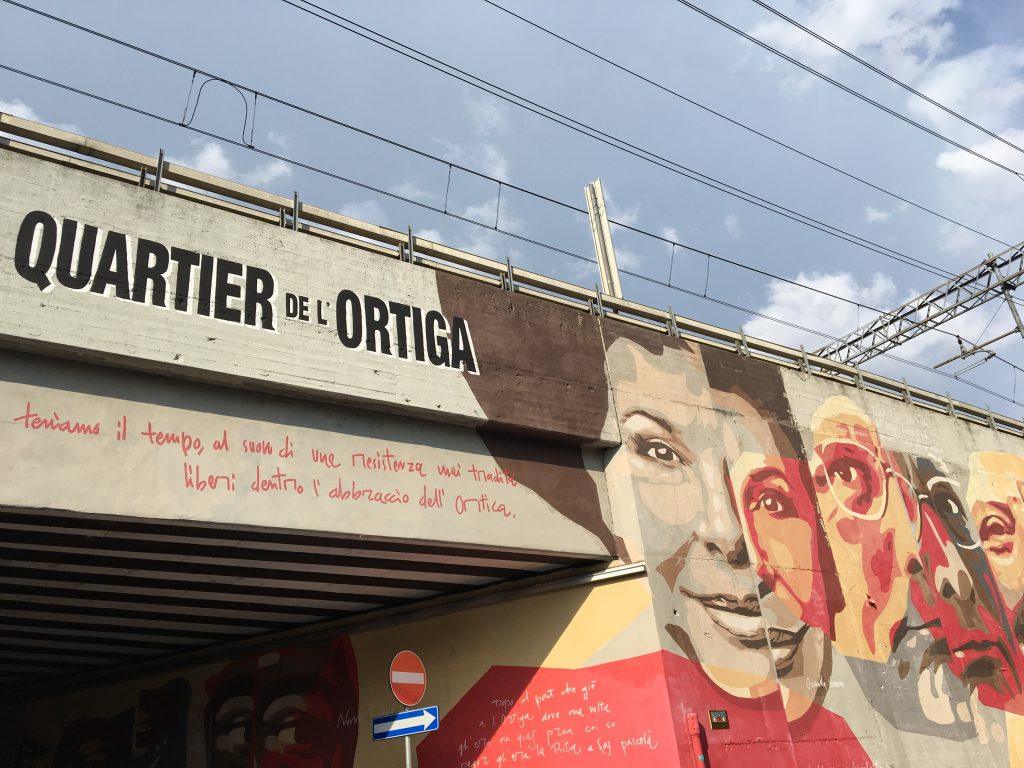 “[…] the positive effect of our work on the community is that we manage to give consistency to a unique collective territorial activation, which creates involvement, positive emotions, confidence in change and positive evolution not only of the urban scenario, but also of the sociality that in the places “decorated” by our murals is created with greater ease […]” – Alita

As we have already told you, the Orticanoodles are a Milanese artistic collective that was born from the meeting of Walter Contipelli (Wally) and Alessandra Montanari (Alita). The duo later expands, becoming a real factory of artistic production to which other artists join.

Why this particular name? Simple: it wants to recall the union between the nettle, a weed as well as a well-known Milanese neighborhood, and noodles, a type of very soft pasta.

Through its art, the group gives life to an unmistakable pop imagery that prefers the representation of natural elements, the human figure and the urban landscape. The message behind their murals is clear, the intent is to make anyone who lays eyes on these wonders reflect.

But what is the technique they use? You expert readers of street art will certainly recognize it immediately, but we explain it anyway: it is the technique of pouncing. Pouncing is a Renaissance technique that involves piercing the contours of the drawing on paper matrices. Once positioned on the wall, the color passes through the perforated matrix (in the past, ashes were used), and once the matrix is removed, the traces of the drawing are drawn on the wall and then completed. Orticanoodles also uses paints that allow, thanks to an innovative technology, the purification of the surrounding air through solar energy.

Although they are continually invited to create works all over the world, for Orticanoodles Milan is a reference point, a nerve center for experimentation and creativity. And it is precisely in Milan that they have contributed to urban regeneration processes through their art, especially in the Ortica neighborhood.

Located in the eastern suburbs of Milan, Ortica has an industrial past behind it. The name derives from “orto” (vegetable garden), as it was a location particularly suitable for cultivation, because it was reached and irrigated by the Lambro river. Even today, despite being part of the municipality of Milan, it almost seems to reach a small provincial town.

Between the end of 1800 and the beginning of 1900, Ortica was crossed by the railway line Milan-Treviglio. A few years later, during the Second World War, Ortica became a real industrial hub, with the Innocenti mechanical manufacturing plants.

It is right here that the collective gave life to an important project, called “ORME. Ortica Memoria”, which through about twenty colorful mural works retraces the history of the Italian twentieth century. In this way it honors and remembers historical figures and personalities who have contributed to making the Belpaese great. They dedicate specific walls to various protagonists among which we find Della Chiesa, Walter Tobagi, Giorgio Ambrosoli, artists such as Giorgio Gaber, Enzo Jannacci and Ornella Vanoni on the “Muro della Musica Popolare”, but also Alda Merini and Liliana Segre, on the “Muro delle Donne”, Lea Garofalo on the “Muro della Legalità”. There are also the “Wall of the Second World War” and the “Wall of the Partisan and the Bishop”.

But the works of Orticanoodles are not limited only to the Ortica district: it is possible to see their works in different areas of the city.

A work, promoted by the Fondazione Pini, has been dedicated to Dario Fo and Franca Rame and can be seen on the facade of the Scuola Civica di teatro Paolo Grassi, in Via Salasco. The 300-square-metre intervention was carried out in collaboration with a group of adolescents from the Near Foundation, which takes care of children with chronic diseases.

In Cardinal Ferrari Square there is another beautiful mural, 150 meters long, which is part of the Wall Art project (2014), created for the 150th anniversary of the Pini Foundation, in which other street artists were involved. Important figures from the world of cinema, literature, music and poetry are depicted, such as Gio Ponti and Gianfranco Ferrè.

Also created by the Pini Foundation is another project called Talking Walls. You can admire it in Piazzale Zavattari, on the walls of the schools, Vittorio Veneto and Ettore Conti, ten scientists and inventors are portrayed. Here, too, Orticanoodles was helped by a group of young people.

In Via Procaccini, right on the facade of the Fabbrica del Vapore, stands the huge face of Nelson Mandela. The work was created in 2014 together with other artists for the 20 years of liberation of South Africa.

In the Giambellino area, you cannot fail to notice the beautiful mural that covers the wall of the association Handicap…Su la Testa!, committed to supporting the social integration of young people with disabilities. The work is part of a redevelopment project also promoted by the Pini Foundation.

How not to mention, finally, the work that the collective has created in March 2021 in the Isola district: a huge mural portrait of the Milanese dancer Aida Accolla, which closes the museum route of INSIDE, at the Francesco Messina Museum.

In short, the list does not end here… There are many other colorful murals of Orticanoodles that you can find around Milan! You just need to pay attention 😉

Without a doubt Orticanoodles is one of the most important artistic groups on the Italian art scene, both for its impeccable technique and for the messages it wants to convey through its art.