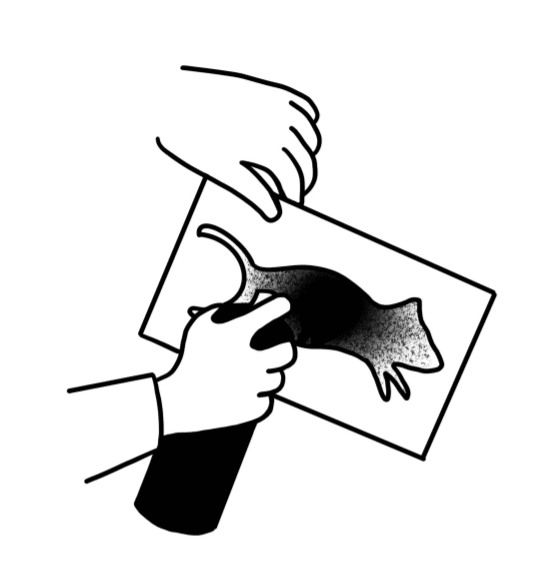 Do you know how a stencil works? It is a cardboard template, no more, no less. By spraying the color inside the cutout you immediately get your shape imprinted on the wall. We can call it art express, your message is ready faster than a coffee. Here it was Blek Le Rat who invented it, or rather, to use this technique for the first time as an artistic expression on the streets of Paris. Blek felt it when he imprinted his first stencil on the wall, a mouse, in 1981, that this gesture had a revolutionary significance. What he still could not know, however, is precisely that such gesture would have given way to the greatest artistic movement of the twentieth century: Street Art.

Blek Le Rat, Xavier Prou ​​to friends, is the father of the stencil. Parisian, architecture student, he discovers the world of graffiti for the first time during a trip to New York in the 1970s. He is struck by it. Back home he realizes that he wants to reproduce in the streets of Paris what he had seen in New York, but with a different technique, which better suited the architecture of his city. The stencil comes to mind, a technique he had seen for the first time on a trip to Padua: he was struck by the stencil depictions of Mussolini still visible on the walls of the Venetian city in the 1960s. From there, the idea. Armed with cardboard and spray can, he traces the outline of a mouse for the first time, signed Blek Le Rat. Why the mouse? The mouse partly because there are more mice in Paris than people, partly because it is a symbol of freedom, of contamination, an animal capable of carrying the virus – art – rapidly throughout the city. And also, it is the anagram of Art. With thousands of rats scattered through the streets of Paris, Blek begins to create life-size characters, their role is to attract the attention of passers-by on social or political issues, or simply a cue of reflection or poetry: beggars, homeless, politicians, journalists, historical figures, stars, artists, anonymous citizens, dancers, musicians or art icons. More than forty different characters and stories populate cities all over the world thanks to Blek. “Bring art to the people” is his philosophy. Michelangelo’s David exits for the first time from the door of the museum to return to the streets, among the people (but armed with Kalashnikovs).

A decade later, Banksy began creating his first stencils on the streets of Bristol. But there would be no Banksy without Blek Le Rat. As he himself admitted: “Every time I think I’ve painted something slightly original, I find out that Blek le Rat has done it as well, only twenty years earlier.”

If we can talk about Street Art today, we owe it to the one who was the first to have the intuition of making walls his canvas and spray painting his means of bringing art to the people. Thank you, Blek Le Rat!