This is Tooltip!
Rome, via Giulia 180

This is Tooltip!
From Tuesday to Saturday, 10am-2pm, 3pm-7pm

Wunderkammern is pleased to present Hogre. Antologica 2007/2022, the long-awaited solo show of the street artist Hogre, best known for his provocative and ironic interventions on the world of marketing and advertising.

Hogre. Antologica 2007/2022 rises from an encyclopaedic intent, but above all with the aim of highlighting the aesthetic research of a provocative artist who is always looking for new challenges. Hogre, street artist specialised in unauthorised, ironic and subversive interventions in the public space, made his debut in Rome in 2006 by covering Berlusconi’s election posters in the Tufello district with insults and red noses. He painted with graffiti and stencils the walls of various cities in Italy and Europe, and in 2011 he inaugurated his first solo exhibition in Rome. This was followed by various other solo and group exhibitions in Italy and abroad.

The exhibition will host a wide variety of works covering all of Hogre’s production from 2007 to 2022, years in which he worked in numerous Italian and European cities such as Rome, Turin, Milan, Warsaw and London. On display with the tools of the trade, the stencils and the wooden board needed to make them, there are the artist’s best-known works as well as the most controversial ones. One example is Alias bacio degli Acquedotti, a reproduction on canvas of a stencil that the artist used in 2020 on the padding of a Roman cistern dating back to the 2nd century AD in the Parco degli Acquedotti in Rome. With the creation of this work Hogre made, as Claudio Gnessi – president of the Casilino Ecomuseum – commented, “an authentically illegal gesture, reaffirming the anti-authoritarian, rebellious and illegal nature of so-called Street Art”.

On display is also an oil painting on canvas entitled Ruinair (semiotic subversion of the Ryanair brand), in which the travel company promotes tourist routes to the “Great Pacific Garbage Patch”, a plastic island in the Pacific Ocean of extension greater than the entire French soil. Of significant importance there are also three works entitled Filter Bubble 1, 2 and 3, inspired by the flows of images of social networks that today dominate our visual perception. The exhibition therefore documents most of the themes and techniques used by Hogre: stencil, but also oil painting, acrylic painting, digital painting, 3D modeling, and screen printing.

Accompanying the show is the presentation of an artist’s book created thanks to Wunderkammern and Interno Notte. Two hundred copies with hand-painted covers, two hundred and forty pages in which pencil sketches, graphics and photos of interventions in the public space follow one another in an experimental layout. A continuous research that the artist explains as follows: “Hogre is the pseudonym with which I have signed creative vandalism and mass communication sabotage since 2007. The name derives from a humanoid monster from a video game from the early 2000s. Monstrum has the same root as monere in Latin, that is to show, but also to reveal and admonish. In 2007 Hogre is the artificial monster with whom I warn myself, overturning and upsetting my condition as a suburban high school student programmed for resignation. The issues I face are argued with the only perspective that I recognize in art, namely that of anarcho-individualism; far from proclaiming the abolition of every rule as is often mistakenly believed, anarchism is that philosophical-political current focused on the radical critique of power based on self-awareness and self-discipline. For this reason, stylistic research and study have always been central to my career as a self-taught artist”. 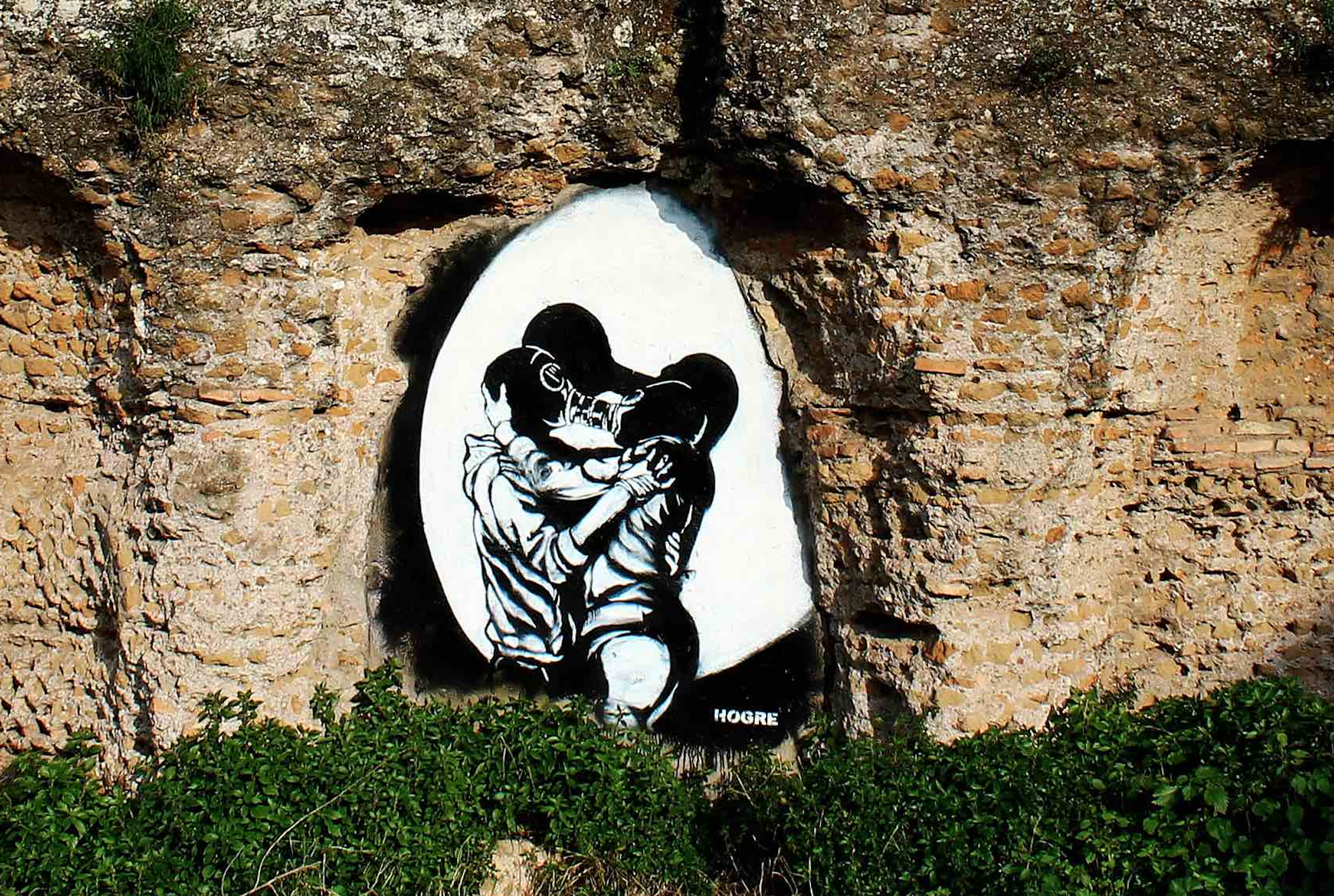