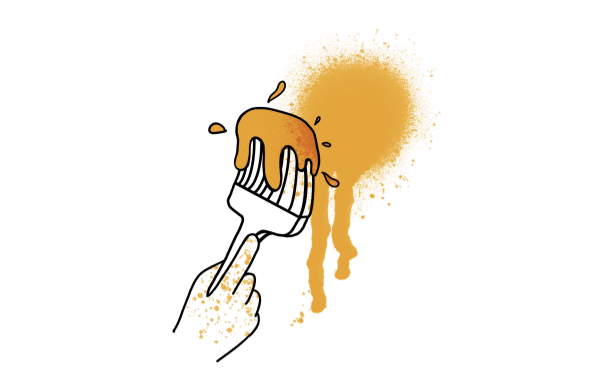 John strolls in Harlem with his eyes down. It’s a gray morning, people go to work in gray jackets and gray shoes, it’s raining in New York. He walks into a cafe, grabs a take-away drink, says hello to the barista. Then, a flash of light on the causeway dazzles him. An explosion of colors comes out of a tunnel, a colorful spray on rails that suddenly invades the city with color. It is a moving museum. It is the subway. John feels a shiver of energy running through him head to toe, light and color are his fuel. It is time to get busy.

JonOne was a teenager in New York during the legendary 1970s forge of graffiti art. Having Dominican origins, he is a lively and impulsive boy, he lives in Harlem, the ghetto, a complex multi-ethnic neighborhood, a protagonist of the underground scene. Here he experiments with cans for the first time, Jon156 is his tag. With his mates on night raids he founded the 156 All Starz crew, which went down in history for creating the most visible graffiti on the subway. Resistance, rebellion, freedom. Art is a hope of redemption in a difficult neighborhood.

Despite the promise of free and boundless art, writing turns out to be an extremely codified and too rigid world for John, who, advised by A-One, his friend and graffiti historian, in 1987 decides to move to Paris to experiment with new forms of expression. In Paris, John discovers a whole new culture, far removed from the microcosm of Harlem. He begins to experiment on canvas at the Hospital Ephemeral a real hospital occupied by artists. And it is in this new dimension and medium that his style will mature from simple tag to abstract expressionist paintings that integrate graffiti calligraphy with dripping – splashes and drippings of color dear to Jackson Pollock.

JonOne’s art is the expressive power of his works: the energy, the gesture, the light that are able to absorb and return to the observer, flooding the space with color. It is the bright and contrasting colors of its South American origins that mix with the impetuousness of graffiti and the dance of color jets. JonOne’s paintings are the subways speeding through New York, vibrant visual explosions against a monotonous background.

His paintings do not go unnoticed and some collectors and galleries begin to take an interest in the young New Yorker of the Ephemeral Hospital. One of his paintings was sold at an auction at a record price for that time for a work of Street Art. From there, the road is downhill.

Today JonOne is one of the most loved contemporary artists in France, he has exhibited in prestigious galleries and museums around the world and has collaborated with countless brands such as Hennessy, Guerlain, Air France, Lacoste and Perrier. In 2015 he was awarded the Legion of Honor by the French Republic and his reinterpretation of the work “Freedom Leading the People” by Eugène Delacroix was exhibited at the Palais Borbon, seat of the French Parliament.