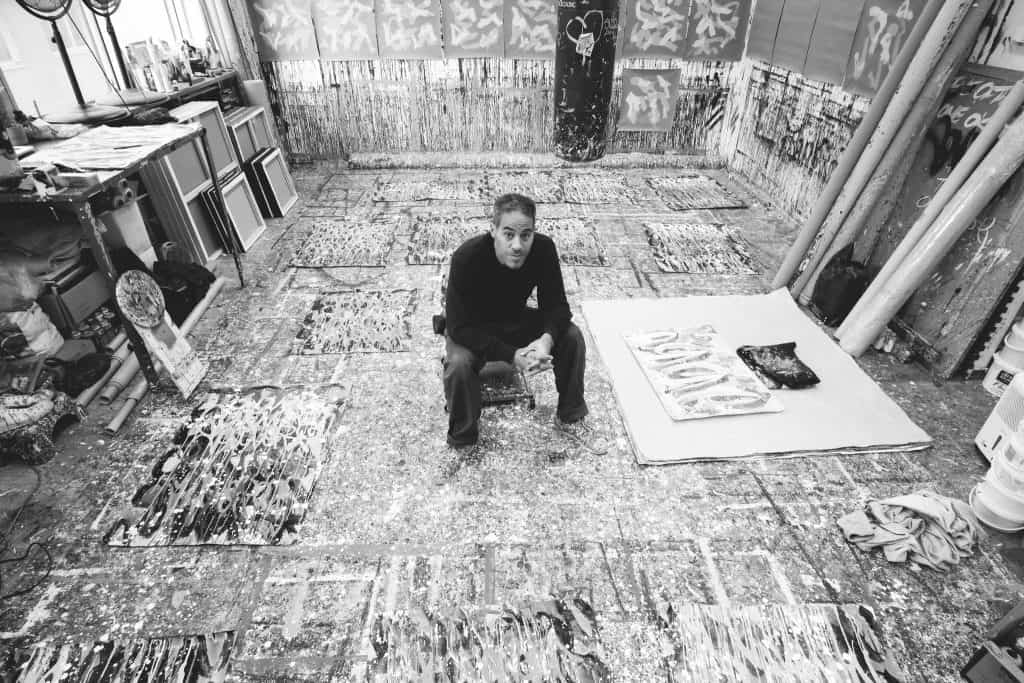 What could Jackson Pollock, the father of action painting and dripping, have in common with JonOne, the self-taught artist who made the metropolitan city his atelier? We answer this question immediately: colour, energy and pictorial material.

From graffiti to canvas

New Yorker by birth but Dominican by origin, the young John Perello, born in 1963, begins his walk-through art at the age of seventeen, moved by a sparkling teenage curiosity and a strong desire to communicate himself. Starting from the private pages of his notebook, the Jon156 tags (where “156” stands for his house number) extend to the walls of the Harlem district up to travel in the subway cars, what he likes to define: “the museum that crosses the city”. Thanks to the nocturnal excursions carried out with the artistic collective “156 All Starz” that he founded in 1984, he begins his rise in the variegated world of graffiti art. But John, more than a graffiti writer, feels like a painter, a broader term that explains the artist’s choice to experiment on canvas using oil technique.

Immersed in the lively American culture of the 1980s, characterized by the clash between Jazz and Hip Hop music, he immediately stands out and carves out his personal space in the underground scene, rejecting figuration and resorting only to writing: “What I did wasn’t representative of what they could imagine, I was freer and technically I was in the imagination.” Regarding his artistic production, John says: “Each of my paintings is an abstract improvisation“. But let’s take a step back …

“I believe that the environment where I was born is the ideal environment to create art”. – JonOne

Why when we speak of abstract expressionism, we also speak of the New York School?

With the incorporation of the European historical avant-gardes, in 1946 New York became a heterogeneous melting pot of artists, that used languages sometimes very different from each other. All this took place about 20 years before the advent of graffiti art.

Among the most famous characters stood that of Jackson Pollock, the “father” of dripping, a technique that consists in letting the colour drip onto the canvas lying on the ground. You can do it with your hands, with a brush or directly from the paint can. However, the criticism was very severe towards him. In 1959 the Reynold News, a British weekly, published an article titled “This is not art, it is a joke in bad taste”, shooting a dirty look to that painting that was becoming dance, that was giving shape to colour through the centrality attributed to the unconscious and automatism. The artist began to inhabit the pictorial surface, to walk through it and look at it from above. Jackson Pollock with his revolution entered the painting and influenced generations of painters.

John drew on these precedents to give rise to his artistic revolution.

Do you know Blank Stares?

Blank Stares is one of the irreverent masterpieces by JonOne, created in 2018. It is an explosion of color made of contrasting games, symmetries and asymmetries that incorporate calligraphy and writing. A return to those origins that cannot be forgotten. Thus, the artist reiterates the dripping technique, like a Pollock of today. But don’t think that a work like this is just the result of improvisation. Just as Matisse who “even before starting to paint, had the painting in his mind”, for John painting is above all a mathematical composition of his feelings, because behind the improvisation there is a plan, a rational thought that has as its ultimate goal the rapture and involvement of the viewer’s imagination.

His unique style, straddling graffiti art and abstract expressionism, has won the approval of critics and public, making John one of the most appreciated artists in France (where he lives and works since 1987) and in the international art scene. To do so, it takes energy: “I still have energy, because you need a lot of energy to paint”. Can you blame him?