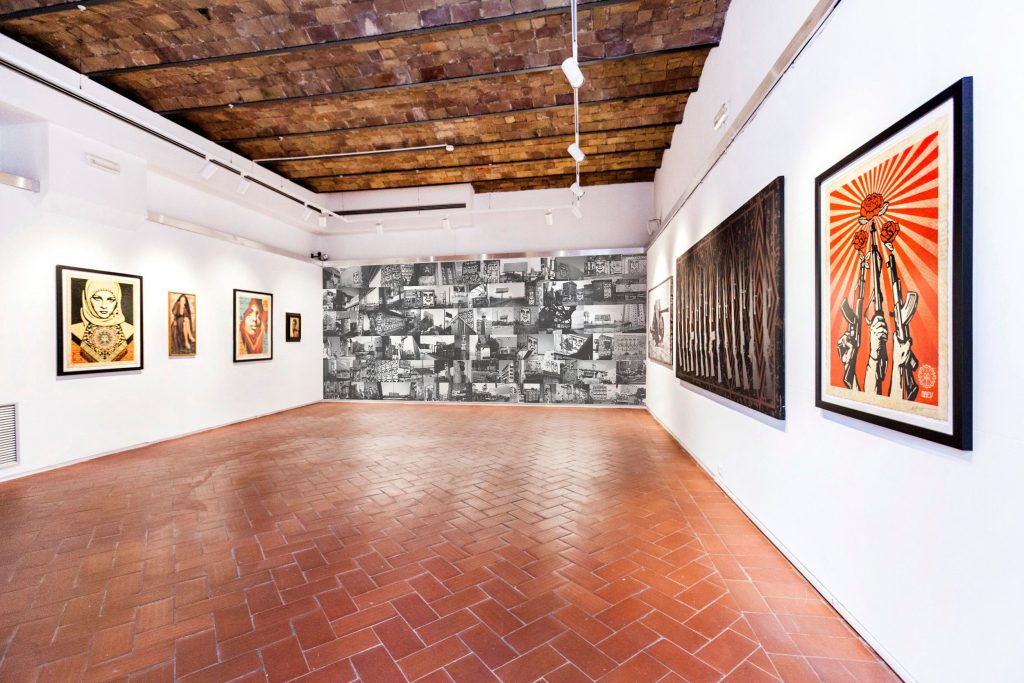 On September 17th, the exhibition “Shepard Fairey – 3 Decades of Dissent” at the Galleria d’Arte Moderna in Rome opened to the public. Thirty graphic works by Shepard – aka Obey Giant – one of the most famous street artists in the world, entered an Italian museum!

The exhibition was scheduled until November 22nd, however, due to the health emergency and the closure of cultural institutions, it is no longer possible to access museums from the beginning of November. Many street art lovers had already visited it, but for those who did not have the opportunity we have decided to tell you about it in this article. The exhibition was organized in collaboration with Roma Capitale, Sovrintendenza Capitolina and Zetema Progetto Cultura. It is curated by Claudio Crescentini, Federica Pirani and Wunderkammern. We are pleased to have contributed to this exhibition, organized in full lockdown, in which Shepard Fairey’s artworks meet and dialogue with the masterpieces of the Galleria d’Arte Moderna.

Let’s start with the title: “3 Decades of Dissent”. Thirty years of career and thirty years of dissent. Since its debut in the early Nineties, Shepard Fairey has confronted face to face with the System: the social, economic and political structure in which we are immersed and subtly whispers to us: “Obey“. His art deals with themes such as the struggle for peace, consumerism and inequalities. The exhibition retraces them, giving space to extremely current issues ranging from racial discrimination, with works from the Brown Power series (Angela Nubian and Jesse Nubian), to climate change, with Earth Crisis and A delicate balance. Shepard Fairey’s art involves us as men and citizens; it denounces and raises awareness of the contradictions of our society and encourages us to raise our voices to ask for a better world. Obey Giant never wanted to be the artist who reassures us, but the one who shakes us.

The exhibition opens with an iconic work, a copy of Hope signed by Shepard Fairey. The poster, that portrays the stylized face of Barack Obama, had become the symbol of the American presidential elections in 2008. After the victory, Obama himself thanked the artist in a letter later published “I have the privilege of being part of your artwork and I am proud to have your support”.

How Obey Giant was born – André the Giant Has a Posse

But when was Obey Giant born, an internationally acclaimed artist and founder of the famous street wear brand OBEY? Shepard Fairey enters the street art scene in 1989 with the André the Giant Has a Posse campaign. He scatters Providence streets with stickers featuring the face of the wrestler André the Giant, who soon goes viral and starts appearing in cities across America. The works on display O.G. RIPS and André Psychedelic rework the wrestler’s face, a subject chosen by chance and for fun, recalling the artist’s first urban interventions.

Interferences: Shepard Fairey’s works in dialogue with the collection of the Gallery of Modern Art

“3 Decades of Dissent” is a unique exhibition not only because it retraces Obey’s thirty-year career, but also because of the particular relationship it establishes between street art and the museum’s collection. Shepard Fairey together with the curators chose some pieces of the Modern Art Gallery to be matched with his own works. Walking through the rooms you can find interferences such as Il Dubbio (1907-08) by Giacomo Balla and Defend Dignity, Susanna (1929) by Felice Casorati and Big Brother is watching you (2019). The artist’ bold and graphic style is thus in dialogue with Italian works of the20th Century according to formal references, resonances and suggestions.