Tellas – In rhythm with nature 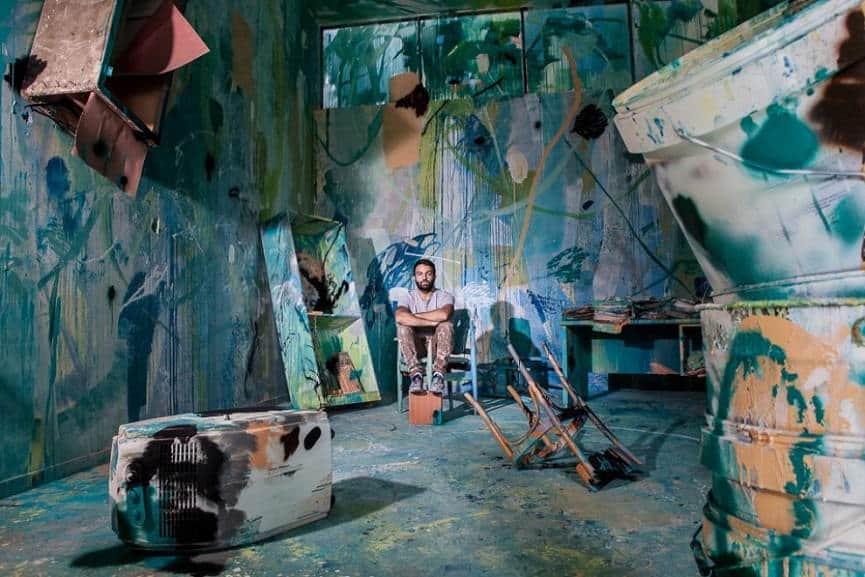 “It’s important to observe and take notes, in my workshops it’s the main part of the journey: we study the landscape, the color of the sky, we describe the plants, the houses. I invite people to look even if they would like to immediately do.” – Tellas

You may have seen some of his work… Beautiful and colorful murals around different cities in the world. We are talking about Tellas!

Fabio Schirru, aka Tellas artist (Cagliari, 1985) is very tied to his land of origin: the Sardinian land inspires many of his works and it is from there that the entire universe of the artist was born, both the name, which is taken from a book of Nuragic archeology and indicates the waste stones for the construction of nuraghi, both his artistic career.

In the artist’s imagination, the link with the landscape has a central role: flowers, plants and other botanical species, seasons, architecture and natural elements are just some of the recurring elements of his works and that Tellas himself is looking for in the environment in which he works.

Tellas’ art ranges from site-specific works to installations, paintings, textile collages, drawings and video productions, always remaining open to experimentation and development of different languages. For Tellas, precedes the realization of a work always a research work analyzing, drawing, photographing and collecting impressions of the surrounding environment. A way of making art that follows the succession of seasons and time. The rhythm of nature, reminiscent of the slow pace of the harvest learned through observation of the work of his grandparents in Sardinia.

He studied at the Academy of Fine Arts in Bologna, where he met and frequented other important street artists of the Italian scene, such as DEM, Blu, Run and Ericailcane. In their early days, they were the first to work with muralism and to have commissions abroad.

The first success of Tellas is an article about him that was written in 2010 by the famous U.S. street art magazine Juxtapoz and the success is immediate: he begins to have many views and receive invitations to international festivals, first of all the famous Nuart in 2011 in Norway.

He is then called by the fashion house Marni to create an animation for the launch of e-commerce on the site. With Marni in Milan he begins to approach textile art, discovering a new interesting language. A few years later, the fashion house sent him to Brazil to shoot a travelogue on Véio, A grande terra do Sertão documentary that later accompanied the exhibition at the 56th edition of the Venice Biennale.

In 2014 the Huffington Post USA included him in the 25 most interesting street artists in the world and in 2015 his work was featured in The Urban Contemporary Art Guide edited by Graffiti Art Magazine, in which he was included among the one hundred best emerging artists in the world.

Among other major international events in 2014 he participated in Artmossphere, the first Street Art Biennial in Moscow, in which seventy artists from all over the world participated, and in La Tour Paris 2013, one of the most innovative organizations of contemporary art projects.

He creates site-specific urban artworks in several cities around the world, including Madrid, Dehli and Perth, including of course his beloved Cagliari, on the occasion of his election as Italian Capital of Culture ’15. Here he painted Under the city, one of his most representative works, on the wall of a block of flats in the Sant’Avendrace district, using shades of green and blue, which are very reminiscent of the backdrops of the Santa Gilla pond, a place dear to the artist.

One of his latest projects is the participation in E.P.ART, promoted by Ecomuseo Casalino and part of ROMARAMA, a cultural program presented by Roma Capitale. The three-year project was born with an idea of urban transformation of the streets of the eastern suburbs of the capital, making them true open-air museums through a series of works of street art.

Under the curatorship of Wunderkammern (ours!) from November 25 to December 5, 2020 Tellas has created two large murals in neutral tones, with botanical and natural elements, creating a special link with the surrounding environment and the green of Villa Gordiani. Where? On the facade of an apartment building on Largo delle Terme Gordiane and on a wall in Via Basiliano, you can go and see them!

Today Tellas continues to paint and travel the world, being one of the most popular artists of the moment. Good job Tellas! Keep reading us for news about the artist 🙂