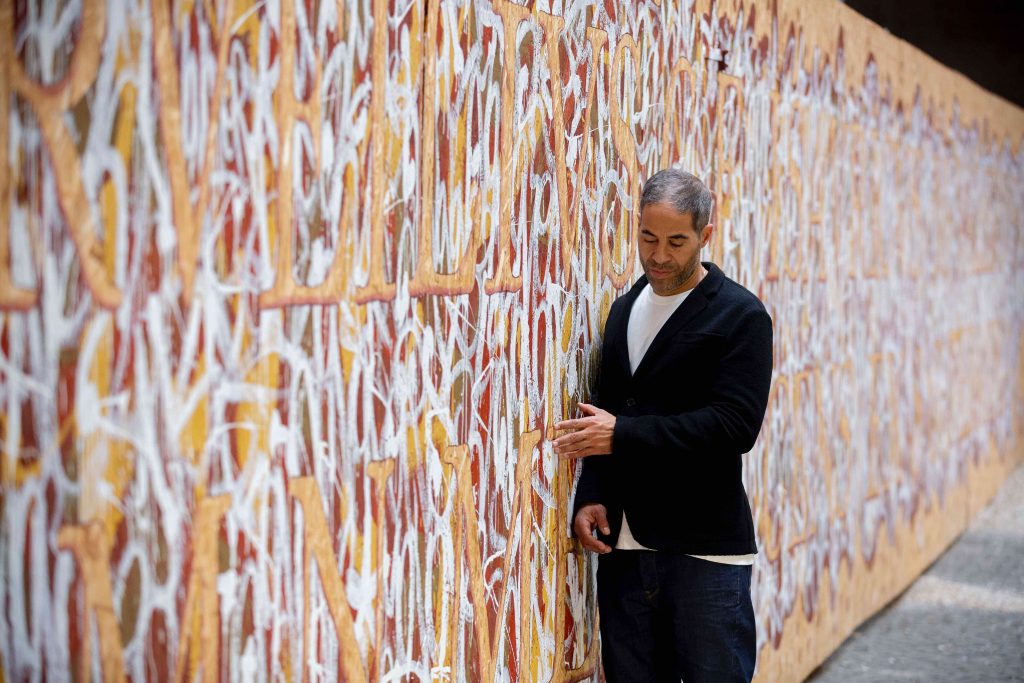 In the autumn of 2021, JonOne‘s art arrived at Palazzo Farnese.

The invitation to Palazzo Farnese

Palazzo Farnese, one of Rome’s most beautiful 16th century buildings, is the seat of the French Embassy in Italy. In 2021, an extensive restoration campaign began, involving the facades and roof, which will last four years. To prevent scaffolding and conservation work from making the palace “closed for maintenance” for a long period, the Embassy decided to invite some of France’s leading artists to create site-specific works that would enhance the architecture, with the intention of making Palazzo Farnese “open for maintenance”.  In July 2021, Olivier Grossetête presented his ‘Ponte Farnese’, then JR created his ‘Wound’ on the exterior façade and finally, in October, JonOne created “Cippo 2.0” in the inner courtyard.

The inspiration: a Roman inscription from 55 B.C.

For internationally renowned urban artist JonOne, the inspiration for “Cippo 2.0” came from a Roman inscription on a cippus dating back to 55 B.C. found in the basement of Palazzo Farnese, which can be translated as follows:

“Publius Servilius Isauricus, son of Caius, Marcus Valerius Messalla, son of Marcus, nephew of Manius, censors, have delimited (this area) by decision of the Senate”.

This cippus, along with some twenty others, was positioned along the banks of the Tiber. The most probable hypothesis is that it had the function of delimiting an area along the riverbank to allow navigation, fishing and maintenance; in fact, it happened that the constructions and activities of private individuals obstructed them.

JonOne: graffiti between contemporaneity and antiquity

“I seem to see people passing by, to smell the horses, the bread in the ovens, the latrine on the corner. Over there, maybe there was even an old woman begging for alms. And here, under the sun, was he, bent over this stone with his chisel. Tick, tick, tick. So these inscriptions took shape. When I work, on the other hand, you can hear the sound of the spray cans. But between his and my work there is a strong connection. He was a true street artist“.
Interview by JonOne for Finestre sull’Arte

JonOne travels with the imagination and goes back two thousand years in time to get in touch with an ante litteram street artist, who like him worked with words, producing inscriptions that were seen and read by the inhabitants of the city. In “Cippo 2.0” John takes up the words of the inscription, rewriting them over and over again as if to bring them back to life, creating a dialogue between past and present, ancient and contemporary. The work consists of a palissade placed in front of the scaffolding; its colour palette is in harmony with the architecture of the building.

We sincerely thank Palazzo Farnese for making the space accessible for the opening of the exhibition “Sun-Downs” – JonOne’s solo show in our Rome office – and for the pictures.