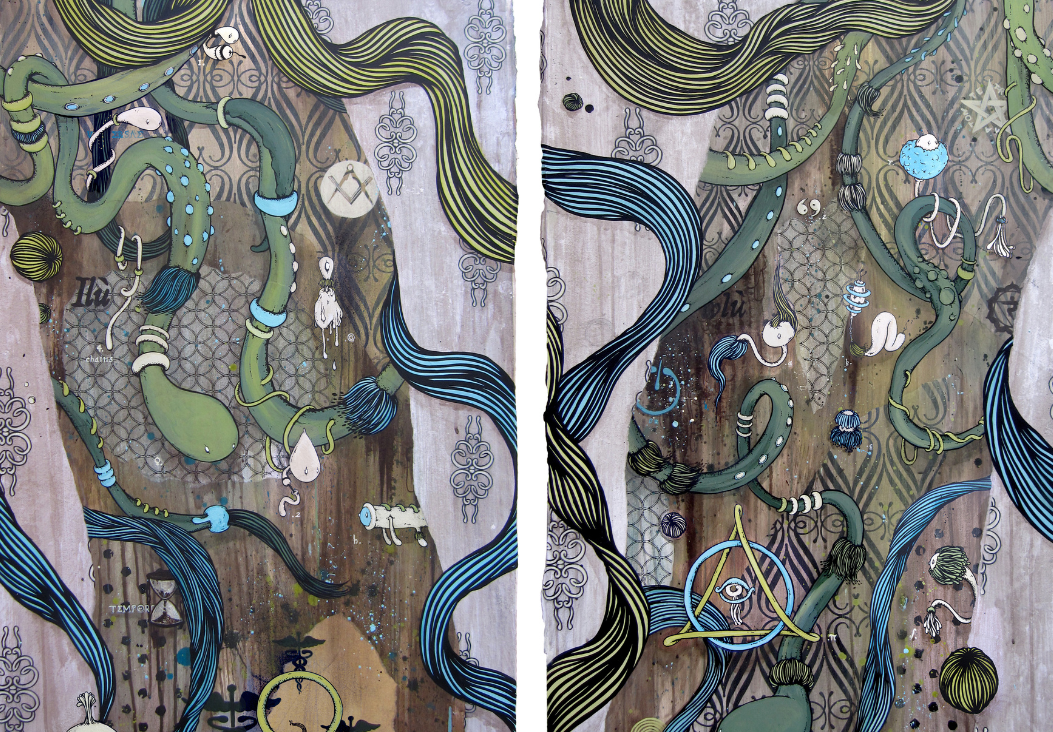 Microbo (Catania, 1970) defines herself as a citizen of planet Earth and a microbe of the universe. She currently lives and works in Milan. Microbo is one of the few female pioneers of international street art.

Her first training took place within the historic Lapis editorial office, a publication that contributed to the cultural rebirth of Catania in the early 1990s.
She then moved to London where she met the street artist Bo130, with whom she formed an artistic and sentimental partnership that continues to this day.

In 2000 together they returned to Milan and became the Italian reference artists of the new underground current of Street Art in the world.
For a few years she was a member of SunWuKung, an Italian art collective that, under the slogan “hardcore entertainment”, performed all over Italy and received several awards in a very short time, also in Europe.

In 2002, together with Bo130, he curated the first urban art events, bringing together for the first time the various generations of Graffiti Writing in a single exhibition. Arteimpropria in 2003 and the Urban Edge Show in 2005 are part of the history of one of the most prolific and interesting periods of international Street Art.

Just as every musical form is born from an evocative repetition of just seven notes, so Microbo’s art develops from the combination of basic elements she likes to play with.

Deeply fascinated by the microcosm, Microbo’s art comes to life from an ancestral organic alphabet – as she calls it – made up of organic creatures and energy conductors that float, almost weightless, in a timeless space. A constant evocation of the beginnings of life and the interconnection that exists between all things.

The search for the invisible as nourishment for the soul is a constant subject in Microbo’s work.
His works, in fact, made using various pictorial techniques and materials, recount stories, myths and legends that confront us with our soul. These are dogmas and mysteries, dear to the ancient philosophers, impossible to explain scientifically, but so deep that they touch the heart.

Microbo: most important exhibitions and publications

Microbo has participated in numerous solo and group exhibitions both in unconventional venues and in prestigious international museums.
Among the most important are: “Nusign 2.4” in 2004, one of the first street art exhibitions in Europe at the Spazio ArtCore in Paris; “Wooster on Spring” in New York in 2006, organised by Marc & Sarah Schiller, founders of the first American street art website “wooster collective” and “Cross The Streets” at MACRO – Museo d’Arte Contemporanea of Rome in 2017.

Her works are part of private and public art collections in Europe and the United States.

In this artistic journey, she was the author with Bo130 and Matteo Donini of Izastikup, a unique collection dedicated to sticker culture.

This is Tooltip!
No related exhibition were found