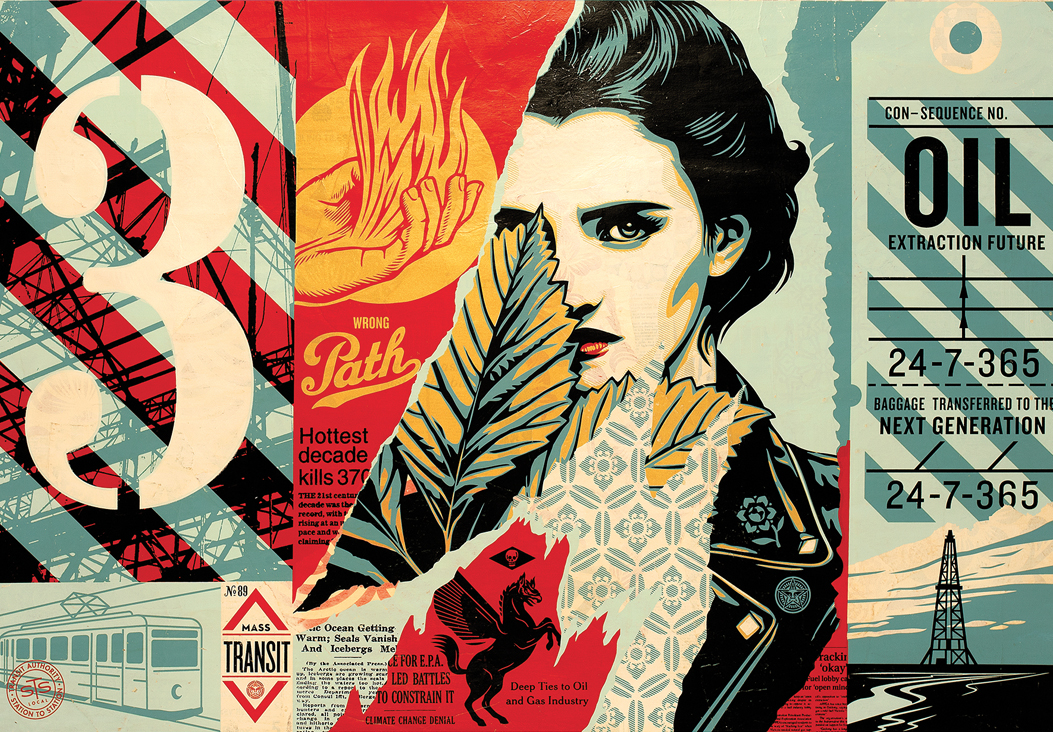 Shepard Fairey (Obey) was born in 1970 in Charleston, North Carolina. He made his mark on the art scene in the early nineties under the name OBEY GIANT and is now one of the most successful international street artists.

In 1989, when he was still a student at the Rhodes Island School of Design, he came up with the sticker campaign ‘André the Giant has a posse‘, by which he plastered the streets of Providence with stickers depicting the face of French wrestler André the Giant.

This was the starting point for his artistic career, which will always be linked to hip hop and punk rock culture. Shepard Fairey shares with skateboarders and punks a rebellious spirit and a desire not to conform to conventions. This philosophy also emerges in his works, with which he wants to provoke a critical response in the viewer. The campaign has no real meaning, but deliberately leaves room for interpretation. Fairey invites the public to reflect on the meaning of freedom and its lack within the rigid system of contemporary society.

In designing the stickers, posters and stencils, Shepard chooses a minimalist, immediate and effective colour palette, using his artistic language to create images that everyone can understand. While the references to pop art are evident in the composition, the themes addressed are very different, as Shepard addresses social and political issues ranging from climate change to war and encourages the viewer’s awareness and civic engagement.

An example of the political commitment of Shepard Fairey? “HOPE‘, the iconic portrait of Barack Obama that became a symbol of the 2008 US presidential campaign. Shepard Fairey‘s Obama went around the world and definitively consecrated the artist’s success.

In 2009, Shepard was invited to do a solo show entitled “Supply & Demand” at the Institute of Contemporary Art (ICA) in Boston, which was later shown at the Andy Warhol Museum in Pittsburgh, Penn and the Cincinnati Contemporary Arts Center (CAC), Ohio, achieving record-breaking attendance at all three museums.

In 2015, on the occasion of the United Nations Climate Change Conference (COP21) in Paris, Fairey became the first artist to install a three-dimensional work on the Eiffel Tower: ‘Earth Crisis Globe‘. The same year, the HOCA Foundation in Hong Kong presented a retrospective of his career entitled ‘Visual Disobedience‘.

In 2018, the Moscow Museum of Modern Art in Moscow dedicated a major solo exhibition to Shepard Fairey, with almost four hundred works on display. The exhibition, entitled ‘Force Majeure‘, was Fairey’s first solo show in Russia.

In 2019, Shepard Fairey decided to celebrate his 30-year career with an exhibition that toured the world: “Facing the Giant: Three decades of dissent“. The exhibition is a reflection on his career that highlights both the continuity and the evolution of his art. Each museum that hosted it proposed a unique version of the exhibition, which arrived in Italy, at the Galleria d’Arte Moderna in Rome.

During his artistic career, Shepard Fairey has made more than 100 masonry works in Europe and in many other states around the world, including Canada, the United States, Russia, South Africa, Hong Kong. His works are present in the collections of some of the main museums in the world including the Victoria & Albert Museum in London, the San Francisco Museum of Modern Art (SFMOMA) in San Francisco, the Smithsonian National Portrait Gallery in Washington and the Institute of Contemporary Art in Boston. 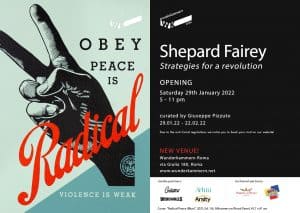 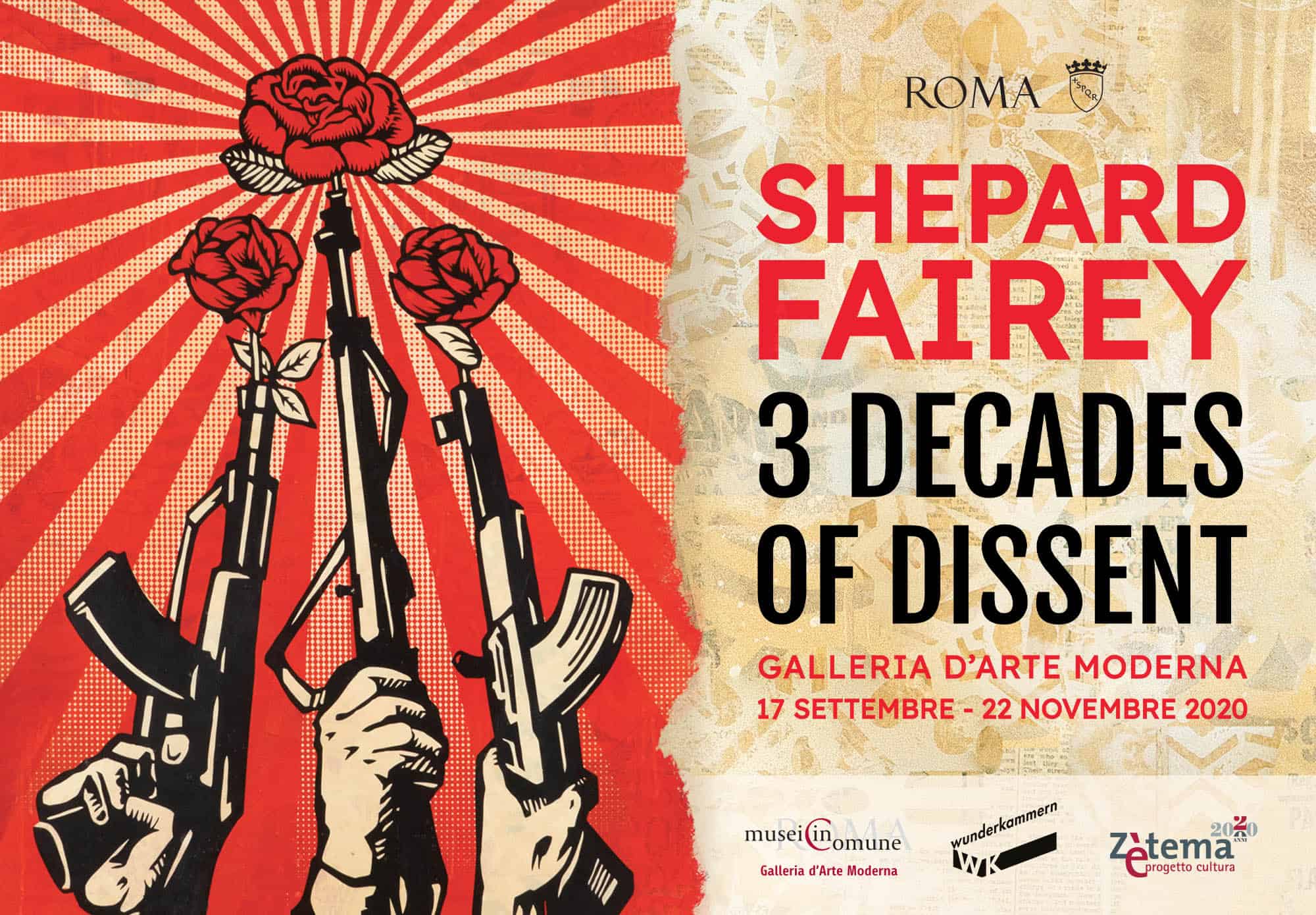 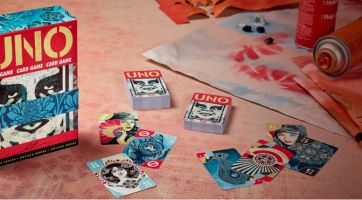 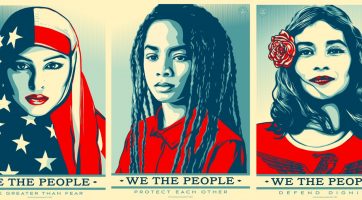 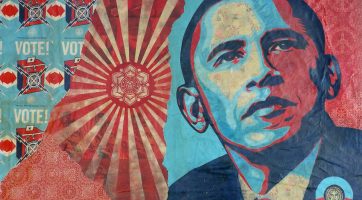